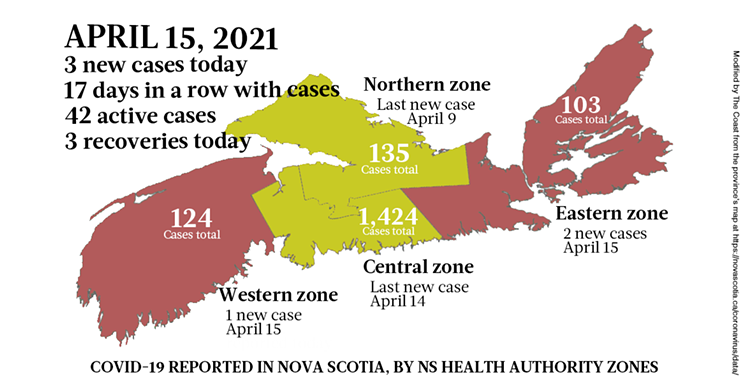 3 cases on a technicality for Thursday, April 15

At last you can read "What happened at Northwood?" the investigative feature by Stephanie Nolen that has occupied so much of my attention this week. It is a powerful, illuminating story about last year's deadly COVID-19 outbreak at the long-term care home, and I am honoured that The Coast is able to bring it to you.

Compared to that story, today's C19 numbers are inconsequential, maybe even farcical. But here we are.

Nova Scotia is reporting three new C19 cases in its daily update for Thursday. "Two cases are in Eastern Zone and the other case is in Western Zone," says the province. "All are confirmed UK variant cases. The people are not in Nova Scotia, but since they are Nova Scotia residents, they are included in the cumulative provincial data. These cases have no known close contacts in Nova Scotia."

You read that right: Three people who are permanent residents of Nova Scotia are currently living in other places, where they caught the B117 variant of the virus, and they count on Nova Scotia's case tally even though they have no active connections to the province now. This is the way C19 is counted in Canada. A Dalhousie student from Toronto who got infected in Halifax, and could infect others in Halifax, would show up on Ontario's statistics; three people from Nova Scotia who get infected in, say, Toronto, where they are living with no plans to return to the east coast anytime soon, are charted as Nova Scotian cases.

That today's three new patients all have the B117 variant is of not great import to Nova Scotia, except that it technically drives our count of the variant to 44 cases.

There are 42 active cases in the province. Local labs processed 2,770 Nova Scotians tests yesterday, which is 500 tests above the current daily average. The province set another record for daily doses of vaccine delivered, with 13,016 jabs yesterday—about double the current daily average. And one more person with C19 has gone into hospital since yesterday, raising the total to four hospitalized people in the province.

Nova Scotia also became less welcoming to New Brunswick visitors today, with the requirement that they self-isolate for two weeks on arrival coming into effect—or really back into effect—at 8am. “Today the restrictions on the New Brunswick border have been reinstated,” says premier Iain Rankin in the province's update. “Our strong adherence to public health protocols has helped us limit the spread of the virus and it is important that we remain diligent to keep our communities safe.”

Where Nova Scotia’s COVID-19 cases are on Thursday, April 15