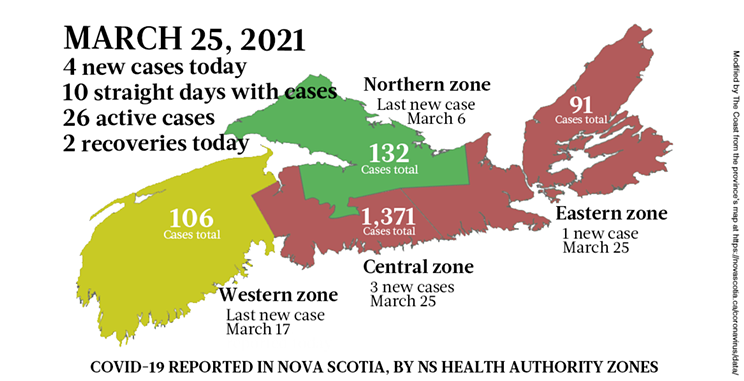 The Coast
Map of COVID-19 cases reported in Nova Scotia as of March 25, 2021. Legend here. THE COAST

A high school infection gets added to Nova Scotia's COVID-19 numbers for March 25.

Every day the province releases the latest COVID-19 data, and every day that information is already late. That's because the numbers that come out today reflect everything that happened yesterday: the newly diagnosed cases, the patients who recovered from the disease, vaccinations, all of it. The only exception is cases in schools, which are announced the same day they're diagnosed—probably because any effected school typically gets shut down for cleaning and contact tracing, and people need to be told not to show up for class the next morning. But this afternoon, the two worlds collided in one press release.

However, before the province actually released the Wednesday numbers, on Thursday a lab made another positive diagnosis—someone connected to Millwood high. So today's press release about yesterday's three infections also mentions this brand-new case.

"In addition to these new cases, a case connected to a school was identified today, March 25, at Millwood High School in Middle Sackville. Because the case came in after the cut-off for reporting, it is not included in today's case update and will not appear on our data website, dashboard or daily COVID-19 case release until tomorrow, March 26."

Now you may be asking: Does that mean we have three new cases today, or four new cases? The answer is yes.

The provincial disease dashboard reflects the three new cases diagnosed Wenesday, announced Thursday. The press release has the three cases and the fourth. And our map (above) and case table (below) have all four cases, because instead of a massive provincial system of labs, public health professionals and communications people to coordinate, we have a nimble journalistic task force (lone typing monkey in a cold basement) dedicated to getting you the most up-to-date information possible across a range of communication modes (frantically clicking between Photoshop and email in a vain attempt to stay warm).

Next you might wonder: What will happen Friday if the province only has one new case to officially announce—today's Millwood infection—but The Coast already counted it? Will it be a Coast zero day, resetting the streak of 10 days in a row that Nova Scotia's had cases, or what? The answer is we hope that's a bridge we have to cross. With case counts creeping up across Canada, any day without cases is welcome, even if it causes some temporary statistical confusion. (Don't worry, typing monkey, you'll figure it out.)

Speaking of rising cases, New Brunswick announced 30 new infections today, its highest one-day total since January 22. Most of those cases are localized around Edmundston, and most of those are the fast-spreading B117 variant of the virus, so the area has been locked down—for four days at this point.

Nova Scotia hasn't had more than 30 cases—heck, more than 20 cases—since the 37 announced November 24, which triggered a Halifax lockdown that lasted for weeks.

New Brunswick's flare-up comes at an awkward time for Nova Scotia premier Iain Rankin. It was just last Saturday that Rankin opened Nova Scotia's borders to New Brunswick travellers without restriction, inviting New Brunswickers to come and go without suffering through the typical two-week quarantine. But New Brunswick didn't reciprocate the welcoming gesture, turning the border into something more like a lobster trap: easy to get into Nova Scotia, difficult to leave (without quarantining on arrival in New Brunswick).

Was Rankin snubbed by NB premier Blaine Higgs? Or did Nova Scotia's new premier make an exuberant rookie error by presuming control over both sides of the border, stepping on Higgs' toes? Either way, Rankin opened a door before he should've, and he probably doesn't want to draw attention to his mistake by shutting it. Yet with a variant-driven outbreak brewing in Edmundston, the safest move is to shut that door.

Rankin, however, doubled down via a press release later on Thursday. The release, which should have been called "Having Your Covid Cake And Eating It Too" instead of "New Brunswick Travel Caution," says:

Nova Scotians are requested to avoid non-essential travel to the city of Edmundston and surrounding communities in New Brunswick as a result of increased cases of COVID-19 in that area.

“This is a dynamic situation and one we have been watching closely,” the release quotes Rankin as saying. “Once we heard late this afternoon that New Brunswick was moving the city of Edmundston and surrounding areas into their red zone, we took action.”

Where Nova Scotia’s COVID-19 cases are on Thursday, March 25