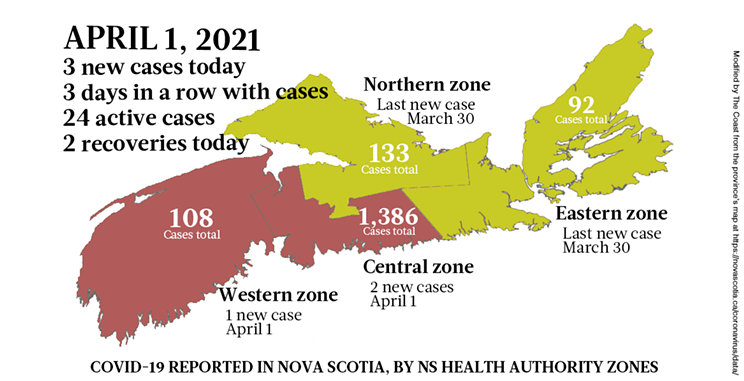 This is the second April Fool's Day of the pandemic, and it's still #toosoon for any wannabe hilarity. Top doc Robert Strang could prank us by tweeting that a new deadly variant was loose in Nova Scotia, or that the vaccine program was suddenly open to people of any age—so ridiculous 🤣—but when creating mass hysteria comes too easy, it probably loses its fun. Instead, both the disease and the province are playing it straight today.

2 new cases March 31 as the humans win the month: Nova Scotia’s COVID-19 numbers as of Wednesday.

Nova Scotia has three new COVID-19 infections, according to the April 1 daily report. Only two people recovered since the last report, so the number of active cases in the province increased by one to 24, and one of those patients has symptoms severe enough to require hospitalization.

Two of the new cases are in the Central health zone; one's connected to travel, the other to a previous case. The third case is in the Western zone, and it's travel-related.

Province labs dealt with 4,240 local tests yesterday, much more than the current daily average, which is just over 3,000 tests. And clinics around the province delivered 5,791 doses of vaccine yesterday, which is also well about the average rate of just below 4,500 daily doses.

Because tomorrow's a holiday for Easter Friday, the regular Friday C19 briefing with Strankin was bumped up to today. At the briefing, Strang really did open the vaccination program early, but only for people between the ages of 70 and 74, and only a few days early. Not an Easter miracle, not an April Fool, just a welcome bit of progress in our surreal reality.

Anyone over 70 can now register for a vaccine: Strang opens bookings for this age group earlier than anticipated.

Where Nova Scotia’s COVID-19 cases are on Thursday, April 1