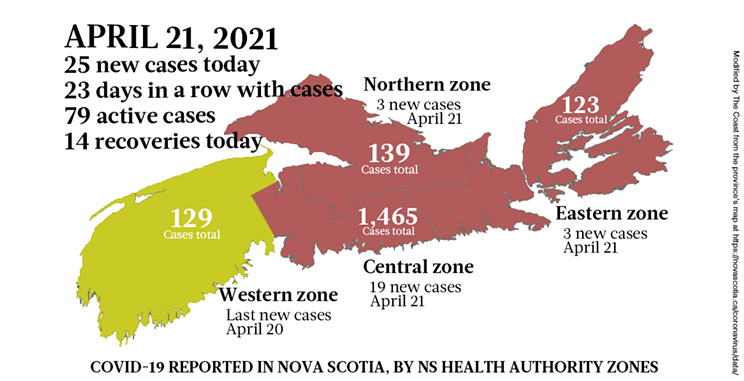 Nova Scotia has 25 new cases of COVID-19 today. This is not just the highest single-day total of the year—and a substantial jump from the previous high of 15 new infections reported Monday—but the most in a day since the 37 cases reported November 24. And that November mark was what triggered the second-wave lockdown for Halifax that lasted well into December.

Twenty-five cases is a lot to detail. Here's the breakdown straight from the province's report for today.

Nineteen cases are in Central Zone. Four are related to travel outside of Atlantic Canada. The people are self-isolating, as required. Nine are close contacts of previously reported cases, two of which were identified Tuesday, April 20, at Dartmouth South Academy and Auburn Drive High. Six are under investigation, one of which was identified Tuesday, April 20, at Mount Edward Elementary.

Three cases are in Northern Zone. One is related to travel outside of Canada. The person is self-isolating, as required. The other two cases are currently under investigation.

Three cases are in Eastern Zone and are related to travel outside of Atlantic Canada. The people are self-isolating, as required.

Two of the six Central zone cases under investigation as possible community spread are particularly worrying. One is an employee of Ocean View Continuing Care Centre, a long-term care home in Eastern Passage. "As a precaution, residents are being isolated and cared for in their rooms and the facility is closed to visitors and designated caregivers," says the province. "Ocean View is working with public health on the testing that is required for residents and staff."

The other is somebody "connected to" a school, the province studiously avoiding describing that connection as a student, teacher, support staff or what, exactly. The school is Joseph Giles Elementary in Dartmouth. It is now closed until at least next Tuesday, April 27, for cleaning.

Fourteen people recovered from their C19 infections since yesterday's report—another 2021 daily high, this one positive—so the current caseload climbed to 79 active cases. That's also a record high for the year, but a less-positive one.

Like the climbing infection numbers, the testing numbers took a major jump, with Nova Scotia labs processing 4,562 local tests yesterday. The current daily average is only around 2,600 tests. And vaccinations are back up to an impressive number, with almost 15,000 doses of vaccine injected yesterday, compared to only about 8,500 jabs delivered the day before. Unfortunately the number of people in the hospital also went up, from two in yesterday's report to three today, although three hospitalized people doesn't sound like many in the middle of a rising pandemic.

Last but not from least, the disease's climbing trajectory lead the province to cancel the International Ice Hockey Federation's upcoming Women's World Hockey Championship. The tournament was supposed to run May 6-16 in Truro and Halifax, but premier Iain Rankin pulled the plug.

“It was my recommendation the 2021 IIHF Women’s World Hockey Championships be cancelled,” Rankin says via press release. “I sincerely regret the short notice, but the rapidly changing environment dictates this decision in the interest of the safety of Nova Scotians and participants. We have worked diligently with Hockey Canada to ensure we can stage a safe and successful world hockey championship and they have been a great partner, but the safety of the Nova Scotia public and participants is paramount and is the reason for our decision.”

This is the second time the world championship's been cancelled due to COVID, and there's no guarantee of a third chance. "Officials in the Premier’s Office were in touch with Hockey Canada," the province says, "and indicated the hope that the tournament will be rescheduled in Nova Scotia at a future date."

Where Nova Scotia’s COVID-19 cases are on Wednesday, April 21

TABLE NOTES The totals for the health zones (Northern, Eastern, Western, Central) may be different than the totals you'd get by adding up the numbers in the Community Health Networks that make up each zone. The zone totals reflect every case in the area, while the community network numbers only show cases that can be localized with the patient's postal code to a region inside the bigger area. Because case information may be updated by the province after cases are announced, two things can happen that lead to different totals: 1. the province never gets the information to track some case(s) at the community network level, leading to a higher number of cases in the zone total than the sum of the networks, and 2. a case may appear in the network day(s) after it was announced when a case that didn't have a postal code receives one, leading to a lower number of cases in the zone total than the sum of the networks. The names of the community networks here have been adapted/shortened for simplicity (click to download the province's PDF map with the exhaustively complete network names). All data comes from the Nova Scotia COVID-19 data page. We use a dash (-) instead of a zero (0) where applicable in the health network numbers to make the table easier to read.