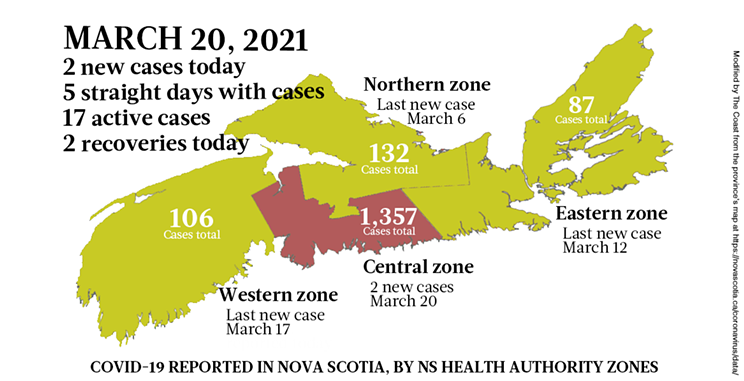 2 new cases on Saturday, the first day of spring

Today the Nova Scotia Health Authority released one of its standard warnings about "potential exposure to COVID-19" at several stores around the Halifax Regional Municipality. We're not going to get into the specifics here—the best, most reliable source of details is the authority's database of potential exposures—but on top of possible risk in Clayton Park and Lower Sackville, it definitely sounds like someone with C19 was doing some grocery shopping last Tuesday afternoon in Dartmouth, and the NSHA is warning anyone who might have crossed paths with the patient to get tested.

Also today, the province is announcing two new C19 infections. "The cases are in Central Zone," says the release to media. "One of the cases is a close contact of a previously reported case. The other case is under investigation."

Being under investigation means the new patient has no obvious connection to travel or other patients, and their case might be an example of community spread. It's if they had no reason to suspect they were infected, so until the symptoms started they were just living their life, going grocery shopping and stuff, potentially spreading the virus in the community.

What does the NSHA warning about potential exposures in Dartmouth have to do with a case that's under investigation as potential community transmission?

Well, according to our table of case specifics at the bottom of this page, both of today's cases are in the Dartmouth community health network. So the infected person who was out grocery shopping Tuesday afternoon just might be the same person who doesn't have an obvious link to getting the disease. Not that it particularly matters; exposures are exposures. But finding patterns of human activity in the deliberately impersonal, privacy-protecting data coming from the province—even highly hypothetical activity—is comforting somehow.

Besides the pair of new cases, two people recovered from the disease since yesterday, so for the third day in a row the province is holding at 17 active cases. There were exactly 2,000 tests processed in Nova Scotia labs yesterday, close to the rolling seven-day average of about 2,100 tests per day. No patients are sick enough to be in the hospital. And vaccination numbers don't get reported on the weekend, as if the local division of the global effort to fight the pandemic by inoculating people against the disease keeps banker's hours.

Thanks to a quote from Nova Scotia premier Iain Rankin in today's report, he gives the impression that he's working on Saturday—and paying attention to the change of seasons. "Today is the first day of spring, case numbers continue to stay low and the remaining restrictions in parts of HRM and surrounding communities were lifted this morning," he says. "However, that does not mean we can let our guard down. Let's continue following public health protocols—washing our hands, wearing masks and keeping physical distance."

Where Nova Scotia’s COVID-19 cases are on Saturday, March 20