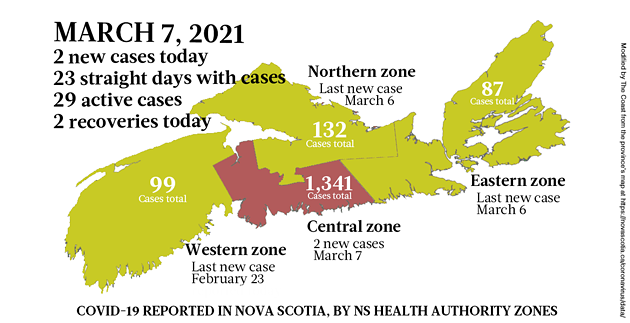 The province is reporting two new cases of COVID-19, both in the Central health zone, on a straightforward Sunday. "One is related to travel outside Atlantic Canada. The person is self-isolating, as required," says the province's report to media. "The other case is a close contact of a previously reported case."

With two patients recovering since yesterday, to offset the two new cases, Nova Scotia is at 29 active cases for the second day in a row. Also like Saturday, two patients are remain in hospital today, with one of them in the ICU.

At 3,685 completed tests, the daily testing number reported today is the lowest in more than a week, since the 3,230 tests reported Saturday, February 27. But even with that low number, the average for the past seven days is 5,169 daily tests, and the province still wants you to get tested, whether or not you have symptoms. For more information, here's the province's testing site.

"Seeing a low number of cases today is encouraging," says premier Iain Rankin cheerily in today's report. "I want to thank everyone for doing their part to remain vigilant."

The other half of the Strankin disease-fighting duo is more the stick than the carrot. "We know how easily COVID-19 can spread if we let our guard down," says chief medical officer of health Robert Strang. "It is up to all of us to follow the public health protocols to make sure we limit the spread of the virus."

Where Nova Scotia's COVID-19 cases are on Sunday

The totals for the health zones (Northern, Eastern, Western, Central) may be different than the totals you'd get by adding up the numbers in the Community Health Networks that make up each zone, because the province doesn't track all cases at the community network level. The zone totals reflect every case in the area; the community network numbers only show cases that can be localized to a region inside the bigger area. The names of the community networks here have been adapted/shortened for simplicity; click to download the province's PDF map with the exhaustively complete network names. All data comes from the Nova Scotia COVID-19 data page.