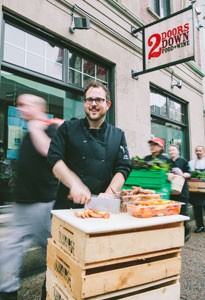 Andrew Farrell uses words like relaxed, rustic and nostalgic to describe the personality he, as a chef, brings to food. "I always feel a bit conflicted when asked to describe my style, because I appreciate the precious side of fine dining, but I love the practicality and sheer deliciousness of down home cooking," he says. "I love making cheffy versions of classics and applying practical kitchen science to the prep side of things. Our burger for instance, it's a burger, but every component was agonized over."

To wit, in the kitchen at 2 Doors Down you'll find them grinding their own meat, making their own pickles and even making their own processed cheese to get the perfect melt on their burger. It's everything from the bigger scope of buying local the fine details of how he uses those ingredients that makes Farrell a chef to follow and 2 Doors Down a restaurant to visit.

The restaurant is co-owned by Craig Flinn, George Davis and Darren Lewis, the team behind Chives (which is, of course, two doors up from 2 Doors Down). It takes the casual ethos of Chives and dials it down a few more notches.

The lack of pretension in the food is a direct reflection of the chef. Farrell's down-to-earth, dedicated work ethos is what made Flinn trust him with the restaurant. "He's talented, but he's also committed to being a cook. He's a cook first," says Flinn. "Andrew was the type of guy–and I think I am, as well–that does not describe himself by saying 'I'm a chef.' He's a cook. I'm a cook, that's what we are. He's a cook that now runs my restaurant, and I'm a cook that happens to own restaurants. But it doesn't change the fact that I'm a cook first and foremost. And it doesn't change the fact that he's a cook."

One of the great achievements of 2 Doors Down is a menu that accessible and familiar, but that rarely echoes another chef's or restaurant's personality.

"There's the 'fusion and confusion' argument. I think comfort food, you can sort of have fusion, but not in that crazy mashed-up sort of 'Let's have bok choy with, um..." he laughs again, "maple."

Farrell's perspective on food has become more and more apparent with the way that the menus, which now include lunch and brunch, have evolved. His "gnocchi," for instance, combines roasted rice cakes with a kimchi-tomato sauce that combines a subtle heat from Korean chili paste with the familiar comfort of a sauce that evokes Italian pasta. And while he experiments with fusion (without confusion), he also evokes the best of Maritime flavours with haddock bugers, fish cakes and pork chops. "My mom," says Farrell, "She's been my menu secret weapon!"

The not-so-secret weapon? Customers. "Customer feedback is key to what we're doing. I want people to be conflicted when they look at the menu," says Farrell. "Do I get the burger or the pork chop? Salmon or spaetzle? We're going to put the spaghetti and meatballs on the menu again sometime in the New Year, back by popular demand!"

It's not just the positive notes that the kitchen is responding to. "Our recent launch of our new combo-style lunch menu is something we did after some valuable feedback from our lunch diners," says Farrell. "We started discussing lunch changes internally after I had a wonderfully honest conversation with one of our regular diners that I ran into on the street late on a Saturday night—the kind of honesty that only alcohol can deliver."

After six months, 2 Doors Down is a finely tuned machine. No surprise with the experience of the owners and the talent of the chef. "The restaurant feels a lot more settled now, she's getting her own personality and she's playful," says Farrell. And he's clear that it's not just him—or even Flinn, Lewis or Davis—who is behind that. The kitchen is full of talent, and they want the customers to know it.

"Our daily bar bites are usually the creations of our line cooks," says Farrell. "And it's been wicked to see the ideas they have! I try to keep some extra market goodies around for them to play with. We keep the mood light while still cranking out killer plates," says Farrell. "That's the kind of kitchen I love working in."

But that's not all. "Also important," says Farrell, "and in no particular order: coffee, high-fives, sharp knives, dance breaks, puns, lists and a quiet hour to myself at the end of the day." 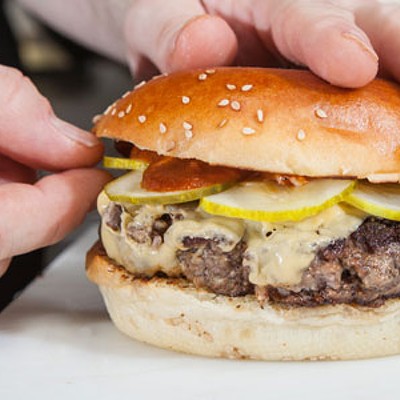