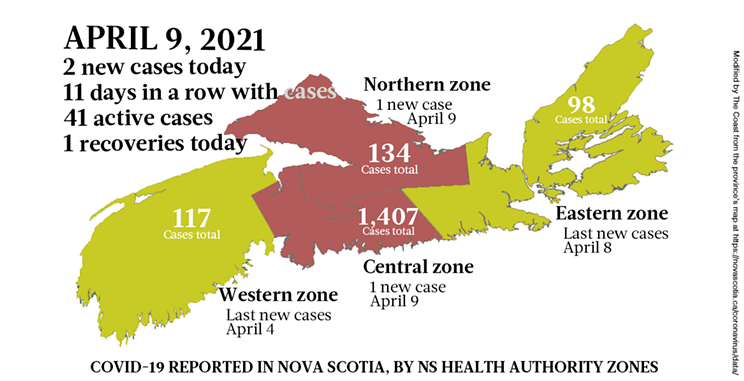 Nova Scotia is reporting two new cases of COVID-19 today. There's been one patient recovered—their case closed in the province's vernacular—since yesterday, so the active case count is increasing by one to 41 active cases, the highest it's been in 2021.

"One case is in Northern Zone and is related to travel outside of Atlantic Canada. The person is self-isolating, as required," the province says in its Friday C19 update. That's the Northern health zone's first case in April; zooming into the zone with our table below, it's in the Pictou health network, which is that area's first case since January 22; and it's nicely contained as a travel case.

The other case is different in every way, being in the COVID hotbed Central zone's highly active Halifax network—Halifax has 13 active cases, the most of any community health network in Nova Scotia—and having no readily apparently link to travel or another patient. That's right, the case is what the province terms "under investigation," calling to mind a battalion of public health professionals mobilizing to study the latest two weeks of the patient's activities, contact tracing every interaction in hopes of establishing a link to another patient and being able to reassure the province that uncontrolled C19 community transmission is not happening.

In other stats from the province, a single patient is in the hospital because of their C19 infection. NS labs processed 2,527 NS tests yesterday, which is higher than the recent daily average of about 1,800 tests. And the vaccination effort achieved two big numbers.

The first number is 8,539, as in there were 8,539 doses of vaccine given out yesterday, by far the most Nova Scotia's delivered in a day during the pandemic. This is a big leap from the second-highest day—6,730 doses, achieved on Tuesday—and it's not in the same ballpark as the province's average vaccination performance. The recent daily average has been around 4,200 doses, and the daily average since the vax rollout began in December is just over 1,200.

The second number is 100,000. The province passed the milestone of getting 100,000 people vaccinated with at least their first dose (reaching 107,510 people by the end of Thursday). That is a significant accomplishment, and it gives a baseline for the next hundred thousand vaccines. The first took 114 days; at the pace of 8,000+ vaccinations in a day, we could reach the second in a tenth the time.

Unfortunately the weekend is upon us so the vaccination effort will almost completely shut down, because even though it's a pandemic and we've got almost 50,000 doses of disease-fighting miracle drugs on hand, it's The Friggin' Weekend. Getting to 200,000 people vaccinated will just have to wait.

Where Nova Scotia’s COVID-19 cases are on Friday, April 9