After taking Monday off, the virus has a busy Tuesday in Nova Scotia’s COVID-19 numbers. 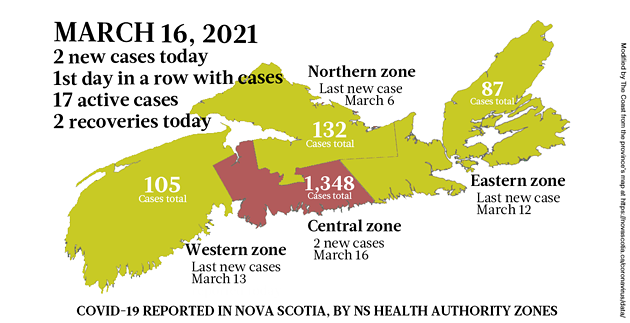 The province is reporting two new COVID-19 infections today. "The cases are in Central Zone," says the daily pandemic press release. "One of the cases is a close contact of a previously reported case. The other case is under investigation." As our handy table of case activity at the bottom of this update reveals, both of the new cases are in the Dartmouth health network.

With any luck the case that's being investigated will turn out to have a travel-related transmission vector, or be closely connected to another C19 patient. The fear is it won't have an obvious source, and thus indicates uncontrolled community transmission may be happening.

We always assume recent travel or a roommate with the disease would get mentioned during testing—those are the standard questions any time we've been tested or tried to go into the Apple Store—if not at the start at the process, definitely after that positive result comes back and public health has a heightened interest in the details. So a case that needs to go "under investigation" makes us think there's a high chance it's community spread.

But after the mess Saturday, with the patient who was somehow able to test positive and be publicly announced as a new case in Nova Scotia without public health learning this person had already gotten a positive diagnosis in another province before travelling here, we've lowered our standards for what information requires an investigation to dredge up. In other words, while this case could turn out to be an example of community transmission, there's a strangely good chance it's tied to travel or another case.

Whether either of today's new patients are infected with a virus variant is a whole other question. Answering it requires the province sending the positive tests to the National Microbiology Lab in Winnipeg. Every positive test in Nova Scotia goes to the lab for genetic sequencing—the province sends a batch of positives every two weeks. "We will ask for prioritization of specimens that Public Health has identified as ones of interest," department of health and wellness spokesperson Marla MacInnis tells us by email. For example, "cases where the epidemiology could suggest higher transmission rates or super spreading events" or "people who have been vaccinated" or international travellers. But even the straightforward cases are sequenced at the lab to find out how the how the variants are spreading.

While it's too early to know about today's cases, the province's Tuesday C19 update says four previous positives have been identified as infections of variant strains of the virus. Two are the B117 mutation (the one initially discovered in the UK), the other two are 501V2 (first found in South Africa).

"This brings the total number of cases of the UK variant in Nova Scotia to 13 and the South African variant to 10," says the update. "One of the UK variants is in Central Zone and the other is in Western Zone. Both are directly linked to international travel. The two South African variants are in Central Zone and are linked to previously reported variant cases.

"At this time, there is no sign of community spread from the variant cases."

The two new cases today balance two people recovering from the disease, leaving Nova Scotia with 17 currently active cases, just like yesterday. In a big change from yesterday, however, the province is reporting that two of those 17 patients are in the hospital, both of them so sick they're in the ICU. (Monday had only one person in hospital, and nobody in intensive care.)

We have one more comparison to make from yesterday's report to today's, and it's about vaccines. In the Monday report, the province said 1,186 doses of vaccine were injected from Friday through Sunday. On Monday alone, according to the Tuesday numbers, across the province 2,067 people got vaccines. That's going from about 400 per day across the weekend to more than 2,000 per day.

We're not so much impressed with Monday's performance as shocked at Friday, Saturday and Sunday. Whatever is happening with vaccinations on weekends, it needs to change. The supply of vaccine in the province is now the highest it's every been, above 43,000 doses, so the only thing holding back Nova Scotia's vaccine rollout is our ability to stick needles into arms. This virus and its faster-spreading variants don't take it easy on weekends, and neither should we.

Where Nova Scotia’s COVID-19 cases are on Tuesday, March 16