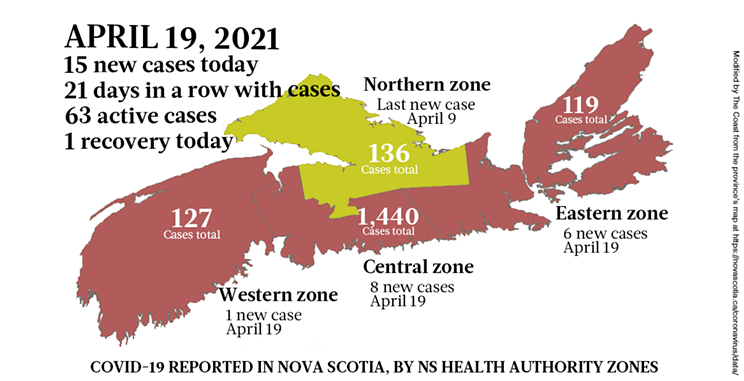 15 cases scattered over half the province April 19

Nova Scotia’s COVID-19 numbers are higher on Monday than they've been in months.

The same day Nova Scotia announced the good news of expanded vaccine eligibly, it also announced case numbers that suggest a viral surge. The race is truly on to find out if we can spread vaccine protection faster than the virus can spread itself.

There are 15 new COVID-19 cases in Nova Scotia on Monday, the most in one day since the 15 cases announced December 4, when the province was in the middle of fighting the pandemic's second wave. And with just a single person recovering, the caseload jumped up to 63 active cases; that's another second-wave mark, the highest since the 65 active cases on December 11.

The eight cases in Central break down as four contacts of other patients, one tied to travel beyond the east coast and three "under investigation" as potential community spread. (The two elementary school cases announced last night are a close contact—at South Woodside elementary—and an under investigation, at St. Joseph’s-Alexander McKay. They are being counted in the province's tally, and on our map and locating table, for the first time today.)

In other standard C19 statistics from the province: NS labs processed 1,950 local tests yesterday, below the current average of 2,200 daily tests. And there were 12,771 people vaccinated on Friday, Saturday and Sunday, an average of about 4,250 tests per day on the weekend, which is far, far below the pace of over 12,000 tests per day Nova Scotia averaged through the middle of last week.

But today's big news is the number and range of the new cases. According to our table, below, which puts information from the province's C19 data dashboard into compact form, fully half of Nova Scotia's community health networks have new cases today.

The Northern health zone—made up of the Truro, Amherst and Pictou health networks—is completely clear of COVID. The Western zone has a new case in just one of its three networks (that one is Lunenburg). Eastern zone, however, has cases in two out of three networks (Inverness and Sydney have cases), and Central zone has infections in four of five networks, as only Eastern Shore is case-free today.

Even the Central zone's West Hants network has a case, and it had been the only network without an infection since the province started giving stats at the network level on January 20. Now the virus has come to all of the province's 14 networks in 2021, and we nervously wait to see where it goes tomorrow.

Where Nova Scotia’s COVID-19 cases are on Monday, April 19