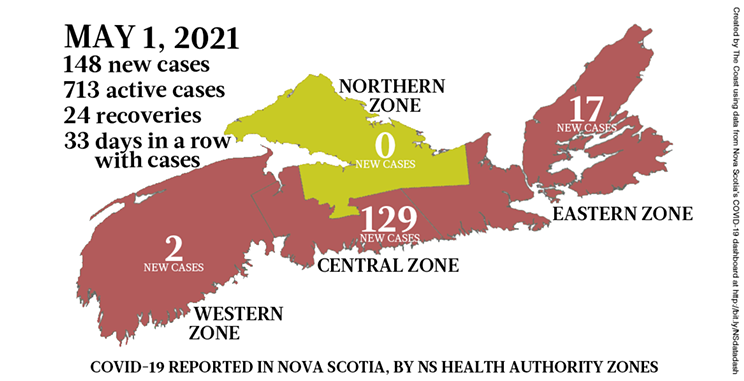 Staff at several long-term care facilities have been diagnosed with COVID-19 during the current rising third wave of infections, including a worker at Northwood, raising fears from the worst part of Nova Scotia's first wave. But no nursing home residents tested positive in the third wave—until now. "Two new cases in Central Zone are residents of the Clarmar Residential Care Facility, a residential care home in Dartmouth, and are linked to a previous case at the facility," the province announced in today's C19 report.

After last spring's deadly outbreak at Northwood, the province came up with a plan for dealing with COVID in long-term care, announcing in November the creation of six Regional Care Units across the province. “We have made changes to strengthen how the sector responds to a second wave of the virus and Regional Care Units for nursing home residents who test positive for COVID-19 is one of these measures,” said the health minister at the time. The RCU for long-term care residents in the Halifax area is at Ocean View Continuing Care Centre, in Dartmouth, a name that might be familiar to you because an Ocean View staff member was announced as COVID-positive on April 21.

At that time, I was told by the NS Health Authority that the infected staff person did not effect Ocean View's use as an RCU, and it would still be accepting any infected nursing home residents. That was the theory; today we have actual cases. I've asked the province if the two Clarmar residents who tested positive have been moved to Ocean View, and I am still waiting for an answer.

"There are 129 cases in Central Zone, 17 cases in Eastern Zone and two cases in Western Zone," the province says. For more detailed locations, check our table below.

The two Clarmar residents don't represent all of the long-term care COVID activity today. "One case in Central Zone is a staff member at the Shoreham Village long-term care home in Chester. As a precaution, residents living on one of the units are being isolated and cared for in their rooms," the province says. (Readers who study the map of health zones may find it odd for Shoreham Village and Central zone to appear in the same sentence. But even though the Shoreham Village site is in Western zone, Chester is near the Central zone border, so it would be a short—and legal under lockdown rules—commute for a worker who lives in Central to get there.)

With 148 new cases and 24 infected people recovering since yesterday's report, the caseload rises to 713 active cases, another record high.

Hospitalizations are also up significantly, from 22 in yesterday's report to 30 today, although the number of patients in intensive care did not change: Nova Scotia still has five people in the ICU.

The province completed 16,578 tests yesterday, a record high for daily testing. Some of those tests—and some of today's positive cases—are doubtless coming from the backlog of 45,000 tests the province revealed yesterday.

“We’re making progress with the lab and data-entry backlog but we will continue to see high case numbers for a few days,” says public health supremo Robert Strang in today's report. “We are in a serious place right now and every Nova Scotian needs to be vigilant, stay home, and make the new public health measures a way of life for the next while.”

Where Nova Scotia’s COVID-19 cases are on Saturday, May 1