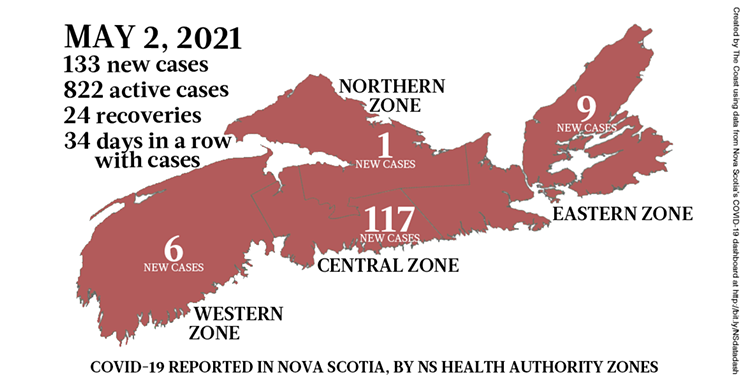 The province is reporting 133 new cases on Sunday. Although this is a drop from the one-day record high of 148 cases announced Saturday, new infections are spread more widely across the province today: According to our location table at the bottom of this post, 10 of Nova Scotia's 14 community health networks have new cases today, compared to seven networks with fresh cases yesterday.

Twenty-four people who had COVID-19 have recovered from the disease since the last report, but with the 133 new infections the caseload has risen to a new pandemic record for the fifth day in a row; currently Nova Scotia has 822 active cases. There are now 34 people in the hospital, including six patients whose COVID symptoms are severe enough that they require intensive care. That's an increase from the 30 hospitalizations and five ICU patients reported Saturday.

The province is not reporting any new infections from staff or residents at long-term care facilities. Yesterday two residents at Clarmar Residential Care Facility in Dartmouth were announced as positive. Since November, the province's plan in case of COVID among nursing home residents has been to send the residents to special Regional Care Units for treatment, with the RCU for the Halifax area being at Ocean View Continuing Care Centre. The Coast asked the province if the two Clarmar residents have been moved to Ocean View; we still haven't received an answer and today's report doesn't mention their status.

Speaking of questions without answers, some of the positive cases reported on Saturday and Sunday are almost certainly from labs working through the backlog of 45,000 tests that was revealed on Friday. However, the province hasn't provided any details. It has not said how many of the cases announced over the weekend are "new" from testing the day before, and how many are "newly confirmed" out of the backlog of swabs taken last week. There were 15,832 tests processed yesterday by Nova Scotia's labs, down from the single-day high of over 16,500 completed tests reported yesterday.

Nova Scotia is now on day five on the latest lockdown restrictions, plus the weekend case counts are high, so Strankin clearly feels it's time for a pep talk. “I know it is tough to follow the restrictions, but Nova Scotians are known for doing what is needed, no matter how hard it is," says top doc Robert Strang in the province's update. "Follow the restrictions, and we will get through this difficult period sooner.”

For his part, premier Iain Rankin addresses the high numbers head-on in his quote from the update. “We can’t get distracted by the case counts or feel disheartened by them—we’ve hunkered down before and stopped the spread, and we will do it again.”

Where Nova Scotia’s COVID-19 cases are on Sunday, May 2