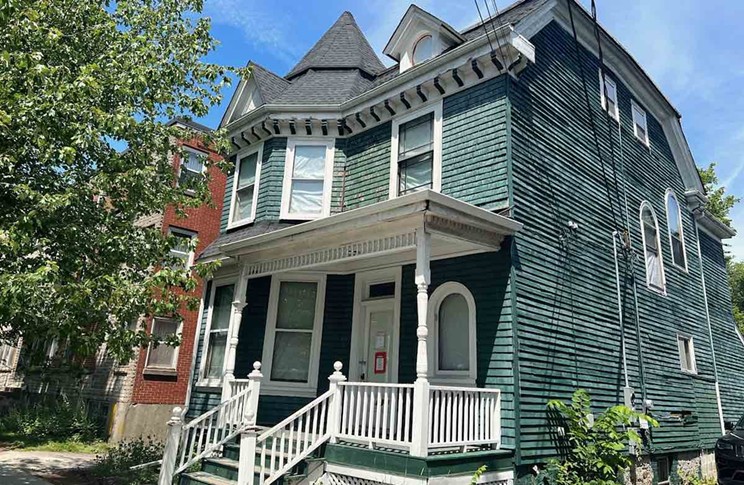 The Coast
This 125-year-old house on Edward Street, which is owned by Dalhousie University, is now one step closer to heritage property designation, effectively saving it from a planned demolition for 120 days.

The vote was unanimous. At a special meeting on Friday, July 15, Halifax’s heritage advisory committee moved 1245 Edward Street—a 125-year-old home that Dalhousie University owns and has a demolition permit for—onto the next step to getting registered as a heritage property. The committee gave the house a score of 64, surpassing the required score of 50 to advance to a heritage hearing at regional council. This means the house is now protected from demolition for 120 days, or until it receives an official heritage registration, and Dal has to pause its plan to tear the house down.

Asbestos saves 19th century house from demolition by Dalhousie—for now: Dal has a demolition permit, but a special Heritage Advisory Committee meeting on Friday might stop the university from tearing the house down.

“It really is a jewel on the street,” Patrick Connor, chair of the committee, said during the virtual meeting. “If it gets demolished, it will diminish the street.”

The house is one of the oldest on Edward Street, and is the largest and grandest. It was built in 1897 and was home to prominent Halifax families the Boaks and the Hobreckers. The house is a rare architectural example of the transition period between two Victorian styles: Second Empire and Queen Anne Revival.

Peggy Walt, who has been fighting to save the house from demolition, held her husband’s hand while she watched the committee tally up the score. She says it was like watching a sports game. And when the number was read out, she cried.

“It was just so exciting,” she said in an interview with The Coast. “The right thing happened and it's so rare sometimes that the right thing happens. It was so much effort, and it was definitely worth it.” Walt submitted the application to the heritage advisory committee, created a petition to save the house and hosted a rally outside the property.

The committee’s decision was even more special for Walt because Thursday, July 14 would have been Susan Sapp’s 97th birthday. Sapp lived at 1245 Edward Street until her death in 2021, which is when Dalhousie bought the house. She ran a nursery school in the house and rented out rooms to Dalhousie students. Thursday, Sapp’s birthday, was the day Dalhousie received its demolition permit after ignoring a violation notice and a stop-work order. So the home being saved on Friday was “a victory for her,” Walt said.

Dalhousie University wants to tear down a 125-year-old home on Edward Street: The school has applied for a demolition permit, while area residents are seeking heritage designation.

Regional council now has to set a date for a heritage hearing, and a notice will be mailed to Dalhousie. Until it receives that letter, municipal staff member Aaron Mumaghan says, the university can technically do whatever it wants. But because asbestos abatement is currently taking place, “It’s likely the house will still be standing” when Dalhousie receives the letter.

The Coast asked Dalhousie how the heritage committee’s decision will affect its plans, and we received a link to a public statement by Gitta Kulczycki, Dal’s vice-president of finance and administration. “While there are many important aspects associated with protecting buildings that have genuine heritage value, Dalhousie does not believe 1245 Edward Street meets those criteria,” the statement reads. The heritage advisory committee, and the citizens who fought to protect the house, obviously disagree.

Walt says Dalhousie needs to do a better job communicating with local residents and respecting the area. “They're right here in our community and our neighborhood, and we get to have a say.”

Where to go stargazing in Nova Scotia