Responses indicate the environment and housing are top of mind for Haligonians.

HRM’s latest resident survey was released last week, and the results tell citizens and politicians alike a lot about the people living in the municipality. This survey is the tenth since amalgamation in 1996, and was conducted between September 1 and 24 by phone, online and on paper.

Questions range from who takes the bus versus drives a car, to who wants to see more money going towards infrastructure, to how much the respondents pay in property taxes. The results will be used as public engagement to inform regional council’s decisions over the coming year.

2Nine in 10 respondents feel housing is lacking in their community.
Ninety-one percent of residents who filled out the survey said housing could be improved, most commonly in the area of emergency housing. Eight-six percent of respondents think the municipality should be playing a larger role in supporting affordable housing, while three percent felt the city shouldn’t play a role and leave housing to the province. See page 9 for the responses.

3Four in 10 residents have barriers to food security.
A third of survey respondents said they have experienced some form of food insecurity, with six percent of people experiencing it “often or always.” When asked what that barrier was, most people (3 in 10) said income, with other challenges including lack of transportation and not enough healthy, available options. See page 9 for the responses. 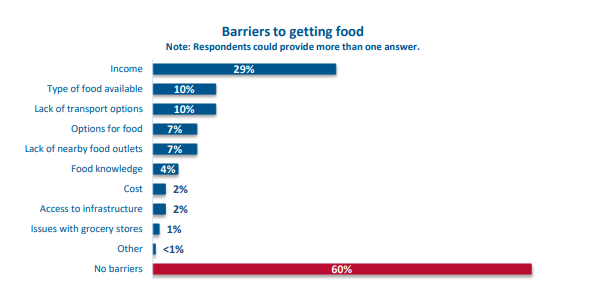 4Less than half the city is back to the office.
This is likely the first time this COVID-relevant question has been asked in the city’s survey, and 44 percent of respondents say they’re heading to their workplace daily. An additional 34 percent say they have some sort of home-workplace combination, while 22 percent are working from home entirely. Only 12 percent estimate they can work from home when things are back to normal, even though 22 percent say that’s their preference. Half prefer a combination of both, and one in four say they wouldn’t want to work from home at all. See page 10 for the responses.

5Half of people surveyed are dissatisfied with the municipality’s efforts to combat racism.
The other half says they are satisfied, and the report tells council there’s “a split.” Forty-five percent of people disagreed or strongly disagreed with the statement that “the municipality acknowledges and highlights the Indigenous history of the region,” while 74 percent of people agreed or strongly agreed the city was a welcoming place for newcomers and immigrants. See page 11 for the responses.

6Three in 10 people want HRM to generate more renewable energy.
When asked about what the municipality’s priorities for climate change should be, 30 percent of people marked renewable energy as number one, and two thirds put it in their top three. Other priorities include energy efficiency and emergency preparedness. People were only widely dissatisfied with one statement about climate change: that the city was communicating what it was doing well. Residents were particularly satisfied (90 percent) with water testing at lakes and beaches. See page 14 for responses.

7More people want taxes to go up than down.
In total, 72 percent of residents were satisfied or very satisfied with their value for property taxes. Thirty-three percent said they would increase their taxes if it meant increasing services, but 18 percent wanted to decrease taxes and services. Most people (49 percent) wanted to maintain the status quo. (Note: The HRM Budget Committee met November 23 to discuss a potential six percent property tax increase in the 2022-23 budget.) See page 14 for responses.

8Four in 10 Haligonians are satisfied with traffic management.
Traffic management satisfaction saw one of the biggest decreases since the last municipal survey in 2018, dropping from 63 percent satisfied to 42 percent. Forty percent of people said they want to increase funding for traffic management, up 10 points from the last survey. About four in 10 people also say they want to increase funding for street and road maintenance, down from 47 percent in 2018. See page 17 for responses.

9Three quarters of people want to get more involved in decision-making, but can’t.
Three in four residents identify at least one barrier for them to participate in community decision-making, with most people selecting “lack of information about ongoing projects,” “not sure how to participate” or not having enough time. Eight in 10 respondents said they voted in the latest municipal election (2020), but the city says that’s quite a high “respondent bias” since the overall voter turnout was only about 40 percent. See page 16 for responses.

10Bike lanes are polarizing.
Half of respondents said they were dissatisfied or very dissatisfied with municipal bike lanes or cycling facilities. Municipal staff cite that bike lanes and cycling facilities were “the standout service in the Low Funding, Low Satisfaction quadrant.” Just 27 percent want more city services going towards these things, down from 37 percent in 2018, but 29 percent of people also said they want to decrease the proportion of municipal services going toward bike lanes. See page 17 for responses.

11More than half the city thinks police could be defunded.
Only 4 in 10 respondents had encountered police in the past year (keep in mind respondents were 89 percent white). Fifty-one percent of respondents felt that there are roles provided by the police that could be provided by non-police services or organizations in the municipality. See page 26 for responses.

12Public transit use is decreasing.
Overall, 45 percent of respondents have used Halifax Transit in the past 12 months, down from 59 percent in 2018. Only 12 percent of people who take transit say they take it daily, while most people (52 percent) only use it a few times a year. See page 31 for responses.