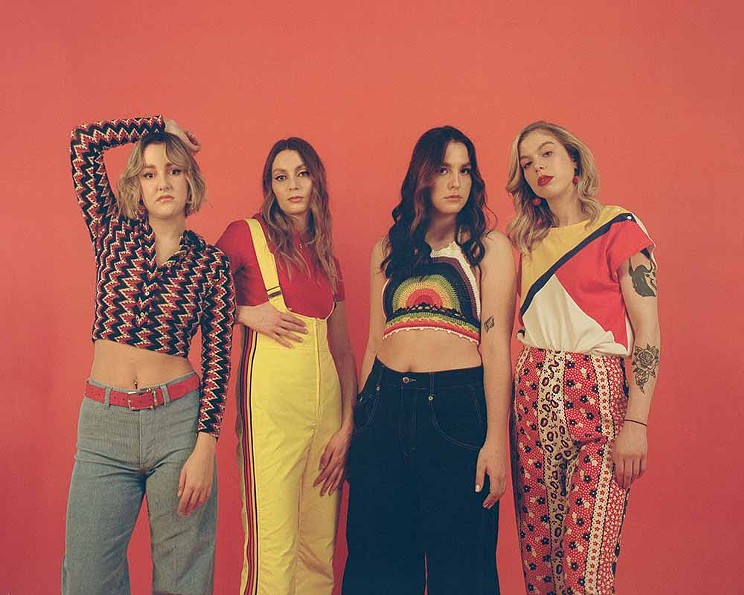 The Beaches will return to Halifax in February 2023.

From Sloan to July Talk to Andy Shauf to Shania herself, here's all the shows we've starred on our calendar for the coming year.

Perhaps you’re on the hunt for a last-minute gift for the music lover on your list. Or maybe you’re just in need of a little something to look forward to after the holiday season ends, a promissory note-to-self for the gray days of January and February. Either way, Halifax has you covered: Next year promises to be full of more of the exciting, big-name concerts that we’ve missed during these pandemic years. Here are a few hot tickets in particular Team Coast is excited about:

Multi-instrumentalist singer-songwriter Andy Shauf has spent the last couple years adjusting his crown as the king of Regina’s indie-cool, erasing his early 2000s Christian rock beginnings from collective memory by winning the ears of the Polaris Prize (for which he was shortlisted in 2016) and the SOCAN Songwriters Award (which he won in 2016). In 2020, he took home a Juno for alternative album of the year, and that’s when the buzz around Shauf’s Ben Howard-esque, haunted songbook grew ever-louder. Now, in advance of an upcoming February 2023 LP, Shauf will play The Light House Arts Centre on January 21. Tickets for the 8pm show are $39.31 via Sonic Concerts.

The biggest band to break out of Halifax’s 1990s rock scene, Sloan is known for crunchy-yet-glistening indie rock, a prototype of the indie sound that still captivates the city to this day. Now based inToronto, the band comes back to N.S. for a rare hometown gig in late January. Tickets for the 8pm Light House Arts Centre show are $44.45 via Sonic Concerts.

Cape Breton fiddle king Ashley MacIssac teams up with the provincial symphony to deliver a showcase both pulse-quickening, culture-sharing and spine-straightening. Along for the ride? The up-and-coming violinist Morgan Toney, who’s been making waves in Cape Breton for his combination of traditional Mi’kmaq music and celtic traditions. Get details and tickets via Symphony Nova Scotia.

The absolute biggest name in Acadian music currently, Lisa Leblanc is a genre-blending powerhouse whose take on disco has launched her to the Polaris Prize shortlist and the top of the French Canadian indie charts. You don’t need to be bilingual to get into what’s happening here, though: Leblanc’s slice-of-life song lyrics and rollicking live show make this a party you can’t help but want to get in on. This Marquee Ballroom show will sell out, we predict—since Leblanc headlined a capacity crowd at Moncton’s Acadie Rock fest this summer and has only gained attention since then. Grab yer tickets—which are $34.20—via Sonic Concerts for the 8pm show.

Another big-deal local act that helped define Halifax’s sound, Joel Plaskett and his band the Emergency don’t take to the stage too often of late—a fact fans of seminal records like Ashtray Rock (the band’s 2007 concept album about high school love and suffering) know, since this gig is already sold out. You can hop on Sonic Concerts’ waitlist, or begin posting your pleas in the Facebook event page for the show—with your fingers and toes crossed.

Enfield’s bringer of bars is taking a look back over his multi-year career with The Retrospected Tour, which sees him going acoustic as he leans into his legacy as one of the region’s most-noted rappers. A two-day stand at the Light House Arts Centre gives fans of all ages a chance to see their idol rock back against a backbeat, with tickets starting at $40. Local R&B mainstay Reeny Smith opens the set, making arriving early non-negotiable.

Toronto four-piece The Beaches sit somewhere between Courtney Love, No Doubt-era Gwen Stefani and Avril Lavinge on the sonic map, pulling threads from these disparate directions at will to blend the type of solid rock music that seems in shorter supply these days. The end result has won the band two Junos and opening slots for acts ranging from The Rolling Stones to The Arkells. See the band shred The Lighthouse Stage for $39.31—and don’t miss local singer-songwriter Burry’s opening set.

Juno winning singer-songwriter Rose Cousins released an album all about the beauty of being alone and how that’s not the same thing as being lonely right before the pandemic hit. That her music became all the more resonant during that time is something not lost on Cousins—but the real case for the record’s timelessness is how it still matches the moment now. Cousins will perform large swaths of Bravado alongside Symphony Nova Scotia, along with other works from her catalogue. Get tickets and details via Symphony Nova Scotia’s site.

Known for its duo lead vocalists who meld honey and granite in their hers-and-his harmonies—and also for its gold-certified debut record and the Juno it nabbed at only two years old—July Talk delivers explosive live shows. Having toured with the likes of Billy Talent and Tegan and Sara, the band has also warmed the stage for names like The National, Against Me! and Spoon. The Halifax show—at the Light House Arts Centre—is part of an East Coast micro-tour that also sees July Talk playing Moncton on April 15. Both gigs see art-rock soothsayer of sound Nyssa (who was nominated for the Polaris Prize for her debut album, 2020's Girls Like Me) playing an opening set that'll be unmissable. Grab tix (which cost $44.45) via Sonic Concerts.

This Scotiabank Centre show sold out in minutes—even the tickets that cost over $1000 went hot. But, as the next stage in the country legend’s comeback kicks into gear (this is her first tour in a number of years, while she’s also dropping new music for the first time in five years), it’s only a matter of time until some Twain tix surface on StubHub or Kijiji. The truly desperate might try posting in the official event’s Facebook page to see if anyone is selling their tickets.

The East Coast Music Awards make their way back to Halifax this May, meaning the region’s brightest stars will be glimmering on stages around town. While a lot of the slate is still TBA, the grand awards show that caps it all off is happening at the Scotiabank Centre May 4. Tickets are $66.75 via the Scotiabank Centre’s site.