With places to go, bands to see and cake to get delivered, HRM is a great place to enjoy legal cannabis. 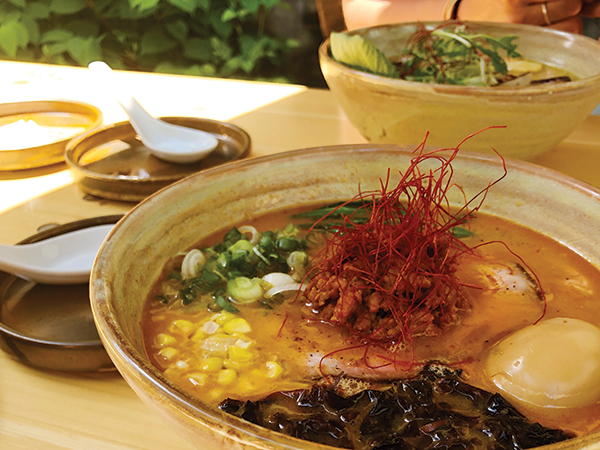 THE COAST
Weed makes each ingredient an adventure at Water and Bone’s back terrace.

Halifax is very conflicted about cannabis. Just days before weed was legalized in Canada last October 17, our city council passed a bylaw banning public smoking of any kind— cigarettes, blunts, vapes, everything—except in a few officially designated smoking areas. So on the one hand, local leaders are trying to kill the buzz. On the other, a recent Statistics Canada study of our sewage found that Haligonians are the biggest pot users in the country.

Maybe we're using a lot in order to dull the pain of living under a municipal government that's so out of touch with public sentiment. But I don't think that's the main reason.

As you'll quickly discover, the scarcity of designated smoking areas isn't stopping people from lighting up outside all over town. So instead of dulling the pain, I think we're enjoying lots of cannabis because Halifax is a great place to be high. Here are three local ways to take your pot pleasure to the next level.

SEE A SHOW
Let me drop some science about why a spliff feels so good with music. All mammals have an endocannabinoid system—that's the ECS—made up of naturally occurring cannabinoid receptors and neurotransmitters, which navigate nuanced communication from head to toe. In other words, the ECS is a literal link between body and mind. It works to keep the body in a state of equilibrium, and it's where phytocannabinoids in weed can work their special magic. Studies have shown that music stimulates these locations in the brain and, therefore, through the ECS, our bodies. When you're putting these theories into practice, remember that finding strains and dosages that stimulate your mind/body connection is an individual journey, so start low and go slow, maybe with a trusted study buddy.

Symphony Nova Scotia's Masterworks concert series
October to May, Rebecca Cohn
Auditorium, 6101 University Avenue
Because what better soundtrack could there be for the precious mind and open heart of a young lit scholar than the music of legends like Mozart, Tchaikovsky and Beethoven?

Them Other Johns Classic Country
Matinee
Sundays, 4-8pm, The Local,
2037 Gottingen Street, free
Them Other Johns is a local band "hell-bent on keeping the twang in country music." The monstrously talented group has been bringing audiences to The Local since last January, covering "good old-time country" and their own takes on the classic style.

Sing Along Show Tunez
Saturday August 31, 11pm, in the lobby at Neptune Theatre's
Scotiabank Stage, 1589 Argyle Street, $5
Join the warm, wonderful award-winning composer and host Garry Williams at Sing Along Show Tunez. He will enthrall you with a solo, engage the room with group numbers and take tips for your requests if you need to get your Roxie Hart on.

Delivery
Freeman's Little New York,
6092 Quinpool Road, 902-455-7000
Some may say "classic," some may scoff at so obvious a choice; but does anyone else stay open until 5am and have THREE KINDS OF CAKE AS A DELIVERY OPTION???

Take out
Cheelin Express, Halifax Seaport
Farmers' Market, 1209 Marginal Road
Cheelin has been cooking up authentic Chinese food known to draw in homesick international students since 1990. Your enhanced palate is sure to appreciate the locally supplied ingredients. This Seaport Market location is open seven days a week, so you can choose whether you want to join the Saturday market crowds or visit when things are more chill. Hit the bong at home, stroll along Halifax's historic waterfront, then grab a Saturday Noodle special to enjoy on the market's rooftop patio.

Eat in
Back terrace at Water and Bone,
5687 Charles Street
The private-ish atmosphere, friendliness of the staff and non-overwhelming menu make Water and Bone a "safe space" to be stoned in public (I would know). Ramen is super-fun to eat with the detail-oriented buzz cannabis can provide, each thoughtfully prepared ingredient its own delicious adventure.

NATURE
Cannabis heightens our senses, and living by the ocean is a blessing. You now live in the unceded territory of K'jipuktuk, the traditional Mi'kmaq name for Halifax, which unsurprisingly means "great harbour." If the salt water doesn't entice you to stay after graduation, you'll miss it when you leave.

Point Pleasant Park
Point Pleasant Drive,
Halifax Transit route #29 bus
An easy walk south from Saint Mary's University with a designated smoking area at its Tower Road entrance, near the bus stop. You'll have plenty of water access in this city-forest, to both Halifax Harbour and the cozier Northwest Arm. The shore of the Arm is a wonderful place to meditate and medicate the stress of school away, especially at sunset.

Merv Sullivan Park
3791 Novalea Drive, #7 bus
A stone's throw from NSCC's Institute of Technology Campus on Leeds Street, this recreation destination in Halifax's north end is where you can catch some rays and a high-up harbour view. Locals call it The Pit.

Fort Needham Memorial Park
5515 Stairs Place, #7 bus
Needham Park got a makeover in 2017 for the 100th anniversary of the Halifax Explosion. (The blast that devestated Needham's neighbourhood is also memorialized in a Heritage Minute.) Now there are lots of hidden details and design minutia to engage the stoned brain, plus an off-leash dog park for animal-watching therapy. It's great on a full moon.

Dartmouth Common
Bordering the length of Park Avenue, near both Halifax Transit's Bridge Terminal (20+ bus routes) and Alderney Landing (nine buses, one ferry)
The Dartmouth Common is one of the prettiest places in HRM, although the endless public transit options can be hard for the high to settle on. If you're coming from Halifax, there's a better way: Toking up and walking the Macdonald bridge over the harbour offers a breathtaking view, and gets you within a walkable kilometre of the Common. To keep the awesome going on the return trip, hit up Evan's Fresh Seafoods for fish & chips on your way through the Alderney Landing ferry terminal (surrounded by three smoking areas, damn!) and sail across the sea using your student transit pass.