10 urban gardens you need to know

Meet the green thumbs growing a brighter future in Halifax. 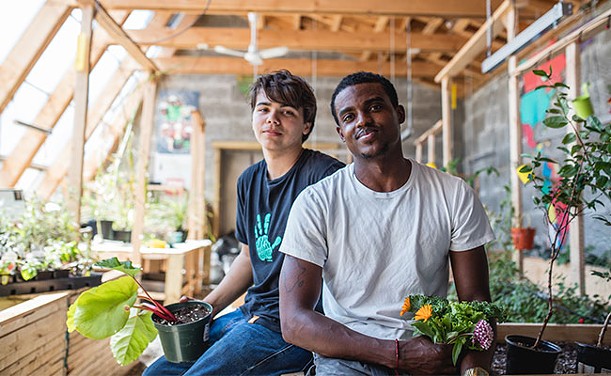 RILEY SMITH
Phoenix Christmas and Alvero Wiggins are helping hope bloom at Hope Blooms.
Urban gardens have been sprouting up all around the city in the last several years, as Haligonians become more concerned about where their food comes from and the ethics behind it. Each garden faces its own challenges: Some have long waitlists, some are lacking volunteers and some are struggling with theft. Despite setbacks they’re all also thriving—donating produce to food banks, allowing immigrant farmers to continue their passion in Canada and nourishing local kids who otherwise wouldn’t get fresh vegetables. Urban gardeners are planting more than just vegetables—they’re building strong communities by sharing gardening tips and working alongside each other. Here are a just a few of their stories.

RILEY SMITH
Moira Harding tends to the abilityGarden.
reachAbility’s
“Income assistance is nowhere near close to a living income, so clients often have to supplement,” says Moira Harding, the garden coordinator at the on Joseph Howe Drive. The group provides access to employment training programs and more recently, fresh veggies.

Harding helps clients grow a mix of things like spinach and arugula, beans and peas, and the ever-popular tomatoes. The garden itself is fully accessible, comprised of three raised beds and a wheelchair ramp. The beds are low and wide, making them easy to access for people with mobility issues. Most of the wood was donated when the garden began six years ago. “We like to plant the garden so that each variety of vegetable that we grow is accessible from the ramp,” Harding says. “It’s empowering to have clients be able to take produce home at the end of the day and say I grew this myself.”

RILEY SMITH
Tim Fletcher says help yourself to the Common's community plots.
Dartmouth Common community garden
The Dartmouth Common has been home to a community garden for over 20 years. Just five years ago, the Park Oven was added, while orchard trees were planted along the walking path three years ago. The trees include apples, cherries and pears, as well as hazelnuts and walnuts. Leighton Dillman Park has five-by-12 plots available to community members for a $10 fee. Most of the gardeners are individuals or families that live nearby, says board member Tim Fletcher.

“There’re some community members that have since moved away but still stay in this community just because they’ve established relationships with us,” he says.

Although the garden did face problems in 2015, when three-quarters of their high-bush blueberry plants were stolen, Fletcher says the fruits on community plots or in the orchard are for anyone walking through.

“We’re trying to keep with the idea of the Common and it being for everyone,” he says. “Vegetables fresh from the garden just taste so much better.” 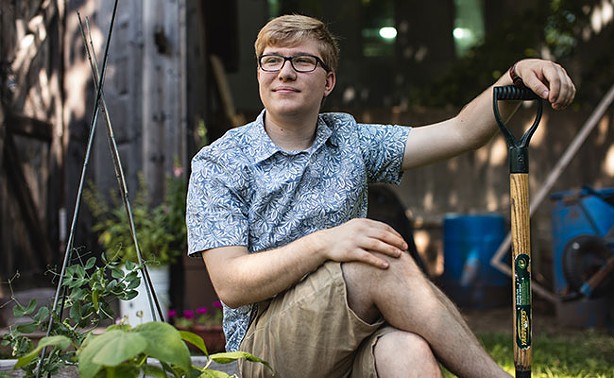 RILEY SMITH
Landon Getz gets it.
Dalhousie urban garden
Hidden behind the computer science building on Henry Street is a little-known initiative trying to raise awareness of student food insecurity. “We previously weren’t on the campus map, we actually still don’t have our official Dalhousie sign, those sort of things, but we’re working on it,” says Landon Getz, outreach coordinator for the Dalhousie Urban Gardens Society.   The garden donates most of its yield to the Loaded Ladle, a free lunch service by the DSU, but Getz encourages all students to take a stroll through the garden. “It’s a good thing to do if you’re stressed with classes, just to get out and enjoy the green space.’

The group hopes to plan workshops in the fall once students return on apartment gardening and food insecurity. “Just bringing attention to the fact that there is a lot of problems with students not having access to good or enough food,” Getz says. 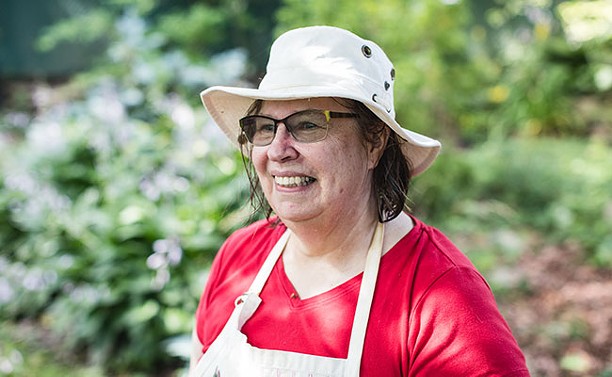 “The next year they did another four, and then I came along and did three,” says Shelley Wilcox, the volunteer coordinator. “It’s been very popular.”

The self-sufficient Ropeworks also collects rainwater and makes their own compost. They grow everything from tomatoes to nasturtiums to peanuts. Wilcox usually sees gardeners tending to their beds in the mornings, but they sometimes get forgotten. “As much as I’d love to pull out the weeds in here, the rule is: if it ain’t your bed, don’t mess with it!”

“We are pretty lucky to have a really central visible location,” says Jayme Melrose, the farm’s project coordinator.

The farm is in its sixth season, and has what Melrose calls a “vegetable vending machine.” A tiny wooden shack open Tuesdays through Thursdays sells vegetables, bouquets of flowers and fresh herbs. The harvest is plentiful.

Last Thursday alone gardeners harvested 85 pounds of salad. The produce goes to their families, to the Parker Street Food Bank, as well as to restaurants and cafes across town like Brooklyn Warehouse, Dilly Dally Cafe and Relish Burgers.

Their partnership with ISANS also allows new Canadians to produce they’re used to growing at home, like bean leaves or squash leaves. Dadaram Humagai, who immigrated from Bhutan in 2014, estimates he saves $1,500 a year by maintaining his two plots at Common Roots. “It helps people gain access to some culturally appropriate foods from their homeland that you just can’t buy in the grocery store here yet,” Melrose says. 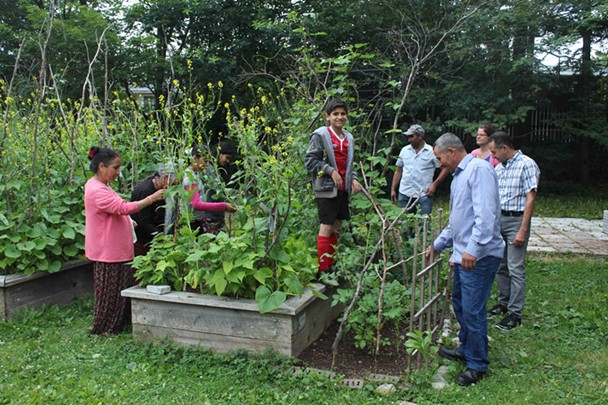 VICTORIA WALTON
Gardeners from Nepal, Bhutan and Syria check to see what this plot, at the ISANS garden on Glenforest Drive, is producing.
ISANS community gardens
Glen Garden on Glenforest Road is the largest of the four ISANS gardens, with over 50 plots. They’re mainly used by newcomer families, many of whom live in the area. Each plot is about four-by-eight feet and usually shared by two families. For Amber Bhujel and his wife Harka Maya, this is “too small,” compared to their six-acre garden in Nepal. Originally from Bhutan, the family lived in Nepal for 20 years before coming to Canada in 2011. Now they grow everything from milkweed and buckwheat to beans and mustard.

Saru Niraula, also from Nepal, grows many of the same things to make curry for her family. She says it’s a great way to get her two young children outside. “Green things [are] good for the eyes, so I always bring them at least a couple hours per day,” she says.

Mohammad al Zoubi came to Canada from Syria with his wife and four children almost two years ago. His community plot is not just for himself. “For me and my friends and my brothers and my neighbours,” says al Zoubi. His friend Mohammed al Jaber misses the longer growing season in Syria, which lasted from April until September. But he enjoys that he can still grow many of the same things in Canada that he would back home. He still isn’t sure whether he’d work as a farmer in Canada though. “Six months work, six months no work,” al Jaber says.  7.

RILEY SMITH
Phoenix Christmas and Alvero Wiggins are helping hope bloom at Hope Blooms.
Hope Blooms
Jessie Jollymore founded Hope Blooms almost 10 years ago. Since then, the wild success on Dragon’s Den has made their salad dressing business a household name across Nova Scotia. In June, they expanded into all eight Atlantic Superstores in Halifax as well as into Cape Breton. “The funds go into a scholarship fund for the youth but we also take a dollar from each bottle to put back into the garden,” Jollymore says.

The garden itself produced about 3,600 pounds of food last and continues to expand. They hold community suppers, movie nights and cooking classes. “It’s a great meeting place,” says Jollymore, especially for newcomers like the 15 Syrian families that now live in the neighbourhood. “Even without being able to speak each other’s language were able to just show each other what we’re growing food.”

Because of this connection, Hope Blooms is partnering with these families for their newest dressing. “We’re always experimenting with new flavours, so we’ll be coming out with a Middle Eastern flavour in the fall.” 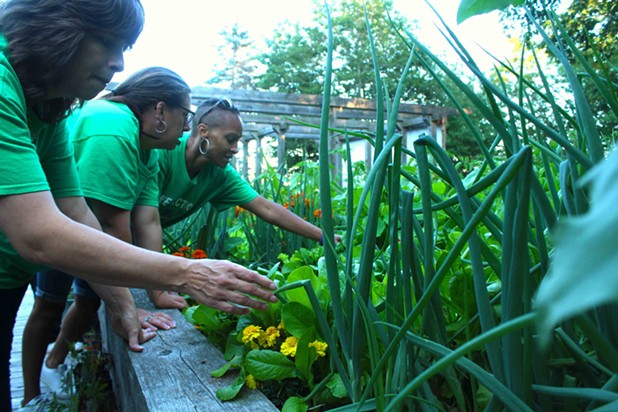 “They wanted to teach the kids about poverty overseas,” says Roseanna Cleveland, a volunteer. “But they’re living in so much poverty themselves, why not try to teach them ways that they can break the cycle?”

Even in the summer, kids, teachers and volunteers show up to tend the vegetables. “This used to be an abandoned tennis court that nobody used,” says Cleveland, who remembers how every weekend the school windows would get broken and would be used for drug deals. But not since the garden started.

“The kids are waiting to get in so they can fill up their little baggies with spinach and beans instead of going around with bags of chips,” says Cleveland, who calls the garden a “little heaven in the middle of nowhere.”

Sinclair thinks community gardens have become more popular lately for a few reasons. “They want to know where their food comes from but also the price of food is very high now.”

The 23 plots are rented for $25 each for the season. Despite the wait list, many plots are under-cared-for during the summer.

“The secret of having a good-looking garden area is you’ve got to look after it every day,” says Sinclair. The garden recently installed a composting station but is having problems with dog droppings getting mixed in when people walk their dogs through.

Everything from squash to tomatoes to bok choy grows in the plots of the quiet garden, where Sinclair often sees people stopping to sit on the benches. “To sit over there as the sun goes down is terrific,” she says.

“We encourage people to donate back to the food bank,” says community ministry director Kristen . “We have the biggest food bank in ,” she says, which serves about 130 people a month.

Hollery describes the garden as a classless society. “You could be the poorest person or the least educated and you could be the best gardener. That gives people confidence.”

The garden is currently benefitting from a new project thanks to Dalhousie’s architecture department—a composting toilet to replace its rented port-a-potty. Two, actually.

“One will be used for a couple years until it’s full, then it will get closed down, then the other one will go into service,” says . When that one’s full, the other will be composted enough so it can be used to fertilize. Just not on the vegetable gardens.


Victoria Walton is a freelancer and recent graduate who dreams of tasting every veggie burger in town.