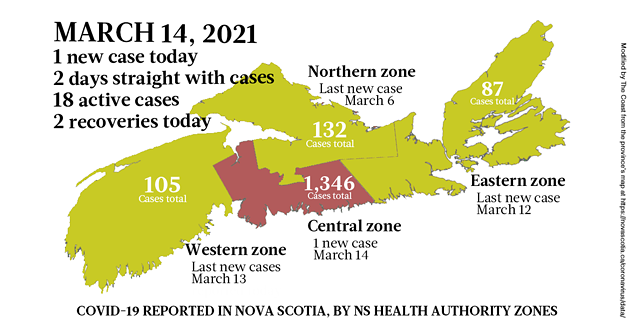 Yesterdays' chaos didn't end yesterday. The province is announcing one new COVID-19 case in the official update today, and it's deleting one of the cases announced Saturday because somebody typed the wrong thing. If only this latest Saturday mistake could be blamed on losing an hour of sleep because daylight savings time's return caused clocks to "spring forward" an hour, but that didn't happen until this morning. Wacky time!

The new case is in the Nova Scotia Health Authority's Central zone, specifically the Dartmouth community health network. It's travel-related.

Then comes today's the magically disappearing case, which is totally separate from the case that got removed yesterday. "The case reported in Central Zone yesterday, March 13, that was under investigation has been removed due to a data entry error," says the provincial report. "There were four new cases yesterday, not five." It was incorrectly data-entered into the Halifax community network, and is counted below on our table as a negative one.

With an apparently actual case added in Dartmouth, and a case subtracted from Halifax, the Central zone maths out at zero new cases today in the table. Wacky times!

Two patients recovered—their cases were closed—since yesterday's report, one patient in each of the Dartmouth and Bedford networks. The province is now reporting 18 active cases of C19. One person is sick enough to be in the hospital, but the intensive care number is still at zero, as it's been since Friday.

"Overall, our numbers are staying low because Nova Scotians are doing their part to keep their social circles small, follow public health measures and get tested," says premier Iain Rankin in today's report. But Nova Scotians are getting tested less than they were. Provincial labs dealt with 2,456 tests yesterday, which is close to the current daily average of 2,537 tests (calculated as the rolling average of the last seven days). One week ago, the daily average was more than double that amount, at 5,169 daily tests.

Rankin's quote continues. "As we head into March Break, we need to respect our public health guidelines and continue to stay the course while we work to get Nova Scotians vaccinated."

This would be a good time to find out how that work is going. Because it's the weekend, however, the province doesn't report any vaccination numbers. In fact, over the past several weeks, the numbers reported on Monday for Friday, Saturday and Sunday vaccinations have been oddly low for three days of inoculations. It's like vaccinations shut down completely on weekends, as if we're talking about a government office rather than the vital effort to get some control over a raging global pandemic. We asked the province—on a non-weekend day—if the vaccination program could possibly get suspended on weekends, but did not receive an answer.

Screenshot of https://novascotia.ca/coronavirus/vaccine/
On Sunday the province's vaccination website says booking is open "right now" for the expanded vax program, even though top doc Strang said booking doesn't open until Monday for some people, Tuesday for others.

Vaccinations should for sure be happening tomorrow as a new work week starts. More people become eligible for the vaccine Monday—people 80 and up who were born in May, June, July or August, joining the already eligible 80+ crowd born in the first quarter of the year—and then on Tuesday, people who are 63 or 64 can sign up for the AstraZeneca vaccine.

At least that's what The Coast's story about Strankin's latest C19 briefing and the province's press release about the expanding program says. The province's vaccination information website directly contradicts the other sources, saying these groups of people can start booking appointments "right now."

To try and clear up the confusion, we asked the province about this, too. But again we did not receive an answer. We're guessing doctor Strang has it right, and it might have been another data-entry issue around the website's days. Wacky timing!

Where Nova Scotia’s COVID-19 cases are on Sunday, March 14

Why Nova Scotia voting districts changed for the 2021 election

Who’s missing from the tally of vaccinated Nova Scotians?