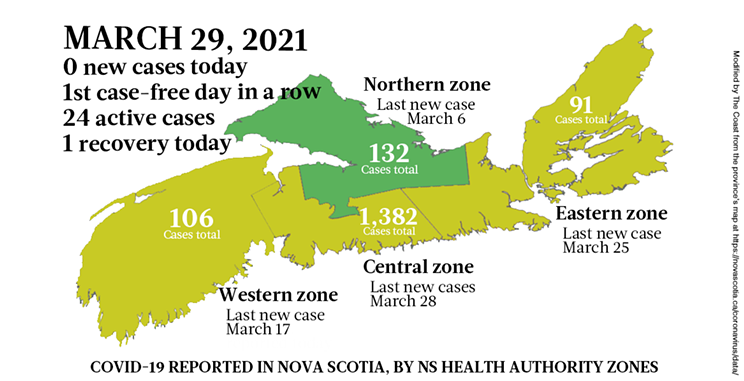 Monday is a good day in Nova Scotia's pandemic. After getting at least one new case every day for the last 13 straight days, today brings no new cases. Not one. The zero day is reported in today's provincial update.

A single person recovered from the disease since yesterday's update, to go with nobody new getting infected, so the number of active cases in the province fell to 24. Our table at the bottom of this post shows where in the province those patients live. The province says one of those active patients is in the hospital, but we don't know if it's the same person who went into hospital yesterday, because the province always refuses to give details. Closing in on the end of March, C19 has scored 70 cases, while the humans have had 83 recoveries.

"Our continued strong testing numbers in combination with people following the public health protocols is a good formula to keep us where we need to be," says Nova Scotia's chief medical officer of health, Robert Strang, via today's report. "We must stay the course. Please continue to wear a mask, limit social contacts, practise social distancing, adhere to the gathering limit, stay home if you feel unwell and wash your hands."

Province labs completed 2,003 C19 tests on locals yesterday. That is well below the current rolling average rate of around 2,400 tests daily.

Speaking of testing, the National Microbiology Lab gets samples of all of Nova Scotia's positive tests, and does genetic sequencing to track the spread of coronavirus variant strains in the province. Yesterday a case related to King's Wharf was announced as a B117 strain, and today the province is announcing three more.

2 cases and a warning for King’s Wharf on March 28: Nova Scotia’s COVID-19 case and virus variant numbers as of Sunday.


"Three new UK variant cases have been identified in the province, none of which are connected to Kings Wharf," says the announcement. "Two are in Central Zone and are related to international travel. One case is considered resolved, the other is still self-isolating. The other is in Eastern Zone and is related to travel within Canada. The case is considered resolved."

The province says there's "no sign of community spread" from the four latest B117 cases. Nova Scotia has now had 17 cases of B117, is still holding at 10 cases of the 501V2 mutation and hasn't recorded a P1 case yet.

In vaccinations, according to today's report—which has the numbers up to and including yesterday—the province has administered more than 89,000 doses since the rollout started in December. Before today, the last vax stats came out Friday, reflecting what happened Thursday, when the total was over 83,000 doses. The difference is about 6,000 doses. Currently the rolling average vaccination rate is around 3,000 shots per day.


Naturally enough you may be wondering if those most recent 6,000 doses were given out on Friday, Saturday and Sunday (something like 2,000 doses per day, well under the average), or if the vaccination effort stops on weekends and Friday set a new daily record of 6,000 doses (way above average). We wonder the same sort thing at the start of every week, and every week we email the public relations professionals at the department of health and welfare to ask for the breakdown. And every week we get no response.

Is the province embarrassed to admit that it shuts down the vaccination rollout on weekends, as if the battle against the coronavirus is being run like a law firm in August? We don't know. But our suspicions can only increase every time the province ghosts on the question.

Where Nova Scotia’s COVID-19 cases are on Monday, March 29