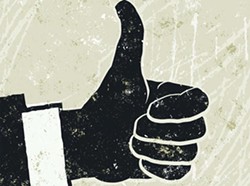 Just wanted to give a shoutout to Tim and Crystal from the Downtown Dartmouth Business Commission. The other day, they were walking up to the guy who sells his poems on the corner of Portland and Wentworth Streets. Instead of being like some business people and asking him to move along or ignoring him altogether, Crystal went right up to him and said, "What have you got for me today?" He replied back that he was pretty sure she had already read the poem he was selling. But she and Tim stayed and chatted, and were just so kind and compassionate. It's really great to see how much love and positivity they add to the neighbourhood!
—Neighbourhood Watcher

Latest in Love the Way We Love

It's the little things